Lake Torneträsk (68°N, 19°E; Fig. 1) is a c. 70 km long, c. 10 km wide, c. 180 m deep and Sweden’s seventh largest lake (332 km2). The lake is hosted by a glacially truncated depression and is surrounded by pine forests to the SE and birch forests towards the NW. Several small streams, draining a confined but geologic and ecologic diverse catchment, feed Lake Torneträsk primarily during the short spring/summer melt season and heavy rainfall events. Its location in a climate sensitive region of discontinuous permafrost make Torneträsk a promising archive for the reconstruction of climate and environmental change and permafrost stability during the Holocene. Because the catchment of Torneträsk has been subject to a number of research activities by national, international, and EMG/Umeå University researchers focusing on climate and environmental change and the dispersal of pollutants, the sedimentary archive of Torneträsk will offer the opportunity to integrate these former studies and put them into a larger regional context. The melting of the large continental ice sheets at the end of the last glacial period in Fennoscandia reduced the crustal load resulting in reactivation of fault zones accompanied by large earthquakes. One remarkable feature of high amplitude seismic activity is the 150 km long “Pärvie” fault, a reverse fault with scarp heights of up to 10 m, which is thought to have formed during a large earthquake short after deglaciation. The “Pärvie” fault cuts through the eastern part of Lake Torneträsk implying that the imprint of this severe event is recorded in sediments of Lake Torneträsk. 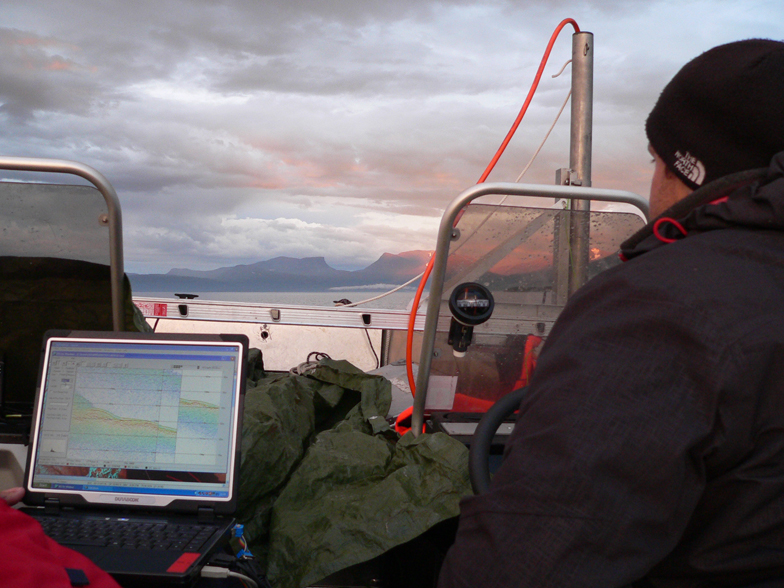 In July 2011 we conducted the first hydroacoustic survey at Lake Torneträsk. In total >150 km of profiles were collected (Fig. 1) providing data on Holocene sediment architecture and accumulation. Initial results show that accumulation of fine-grained sediments is restricted to sites close to major inlets. In more distal parts of the lake, these sediments are a few tenths of centimetres thick, if present at all. Based on the hydroacoustic datasets we selected four primary coring sites allowing for reconstruction of past climate and environmental changes as well as past seismic activity. Coring of these sediment sequences was conducted in April 2012. Gathering of sedimentological, physical, geochemical, and chronological properties from sediment cores and surface sediments is currently in progress and will be used for the calibration of seismic data, the establishment of a paleoseismological event stratigraphy, and for the reconstruction of climate and environmental change, weathering, and permafrost stability. The paleoseismological focus of our initiative is part of the ICDP Post Glacial Fault Drilling project. The principal objectives of the PALTO initiative are to:

International collaborators on this project are: M. Ask (U. Luleå, Sweden), B. Wagner (U. Köln, Germany)